It’s that time of year when it’s sunny and 60 one day and snowing the next day!  Many of my 40+ years in this region we’ve seen snow on Memorial Day and 4th of July and this year was no exception.  It snowed much of Memorial Day weekend.  Weather in the mountains is erratic and the results are dramatic. In Yellowstone Park sits a huge body of water, Yellowstone Lake.

The lake has 140 miles of shoreline at about 7700 feet in elevation, and an average depth of 130 feet (and over 400 feet deep in some parts of the lake). Notice the hot springs on the Shore of Yellowstone Lake.  This is just one example of the volcanic history of the lake.

The surface of the lake freezes by Christmas each year, despite hot vents arising deep from the bottom.  Anticipated each spring is timing of “ice out” (the ice coming off the lake.)  This year it was May 21.  At the same time, snow levels are dropping, more open ground is greening and life is emerging.  Visible are young bison, elk, bear cubs, wolf and coyote pups .  Some nesting birds like the Common Loon, White Pelicans and Osprey are just arriving. 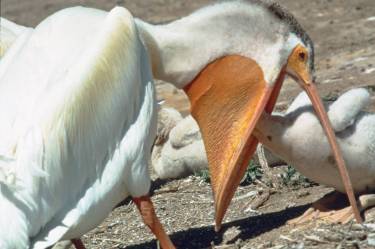 Also at this time, fisheries biologists are putting boats in the water to manage a non-native fish to these waters, Lake Trout.  These trout are native to the Great Lakes, Alaska and Canada, and even in some parts of Montana.  And yes, they are fun to catch and eat, but they don’t belong in Yellowstone Lake.   They were first documented in Yellowstone Lake in the mid-90s and it was recognized they had been illegally introduced.  These large, deep-living trout prey on the more shallow dwelling, native cutthroat trout.  They also compete with the Cutthroat for some of the food sources traditionally eaten by “Cuts” creating a “double edge sword” that has impacted Cutthroat trout populations, which became perilously low.

These native populations are pivotal as they keep the circle of life turning.  Species like

Cutthroat trout that impact the lives of many others, are called Keystone Species.  As their numbers drop, other species have to adapt or disappear.  Examples include River otters, Grizzly bears, Mink, Common Loon, Osprey and dozens of other species that have depended on shallow living Cutthroat trout as a food source.  Lake trout live at great depth and cannot substitute as a food source.     Since the late 1990s almost 3 million Lake trout have been removed from Yellowstone Lake by park suppression methods.  Biologists monitor both species and have seen indications of a decrease in the population of Lake trout and increasing abundance of Cutthroat trout.  It is unlikely Lake trout can ever be completely removed from the lake, but by managing and keeping their numbers low, Cutthroat numbers can continue to rebound and once again, fill that needed niche.

Located south of Yellowstone Lake,  Grant Teton National park is the home of a  very “famous” bear who is a “darling of photographers”, Bear 399.  She has become quite well known over time as has had 17 documented cubs, including 3 sets of triplets.  This year, at age 24, she has 4 cubs.

(Photos are from 399s Facebook page)       Most Grizzly bears don’t make it to that age, let alone emerging from hibernation with cubs of the year.   Well known and respected photographer, Tom Mangelsen has followed her through her lifetime.  “I had a hunch a large litter was in store, because when she lumbered toward her den last fall she was slinging a grizzly gut 2 inches from the ground.

This is the third time she has come into view May 18.  Whenever she has cubs of the year, she waits and comes out that day!” one of her triplets, tagged as Bear 610, had twins in 2011.  If you’d like to read more about this well -bear, Tom Mangelsen and Todd Wilkinson together published a book “Grizzlies of Pilgrim Creek, An Intimate Portrait of 399”.

Get outside when you can!   Leslie