Nature News #7 is a story is about the interesting connections between 2 species that have intrigued humans through time, wolves and the ravens. Both of these species have sophisticated social systems and interactions with their own kind.  Both have complex

vocalizations and ways they communicate.  Both learn very quickly, and through time, wolves and ravens seem to have learned how to tolerate and even welcome the other species in their lives

Wolves were re-introduced to YNP in the mid-90s and as their population rebounded, there is now a balance that fills out the entire compliment of species that existed before the park was created. Ravens have continued to thrive in Yellowstone, but they did not forget the wolves and very quickly after reintroduction we started to see the cooperative and impish behavior between both of those species.  Ravens have been called “wolf birds” because of these relationships.  When I am looking for wolves, which can be difficult to find, I am always looking for Ravens as a clue that might indicate the presence of wolves.  Many of us who spend lots of time in and around Yellowstone and wherever wolves are found often discuss the amazing and often times entertaining behavior of Ravens in the same breath as discussing wolves.  Ravens, and many of their cousins (Corvidae), are known for their intelligence and ability to learn and adapt.  They have been observed using natural tools, figuring out puzzles and have a vast variety of sounds and calls.  Ravens pair bond for life and can live up to 5 decades.

Wolves in Yellowstone live much shorter lives averaging 4-6 years.  They risk their lives every time they need a meal hunting for prey.  When they aren’t hunting, however, it’s fascinating to watch wolves and their interactions with one another.  Ravens will follow wolf packs to find a carcass to scavenge. 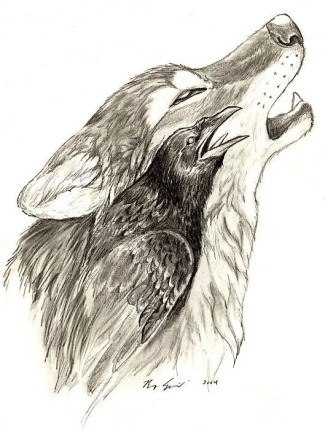 Sometimes they will harass the wolves in an almost play like behavior. Ravens will dive at and harass wolves or peck their tails to try to get the wolves to chase them.

The wolf and the Raven have a complex connection.  In “Wolves and Men”, Barry Lopez wrote: “The wolf seems to have few relationships with other animals that could be termed purely social, though he apparently takes pleasure in the company of ravens. The raven, with a range almost as extensive as the wolf’s, one that even includes the tundra, commonly follows hunting wolves to feed on the remains of a kill.

In “Mind of the Raven: Investigations and Adventures with Wolf-Birds,” zoologist Bernd Heinrich notes that Ravens lead wolves to their prey, alert them to dangers, and are rewarded as they scavenge the carcass.  He writes,

“Ravens can be attracted to wolf howls. The wolves’ howl before they go on a hunt and it is a signal that the birds learn to heed. Conversely, wolves may respond to certain raven vocalizations or behavior that indicates prey. The raven-wolf association may be close to a symbiosis that benefits the wolves and ravens alike.  Ravens have been observed alerting wolves to vulnerable prey. At a kill site, the birds are more suspicious and alert than wolves. The birds serve the wolves as extra eyes and ears.”

Wolves and ravens have long been connected in folklore and fact. The Nordic God Odin is often represented sitting on his throne, flanked by his two wolves Geri and Frei and two ravens Huggin and Munin. Tales of hunting interaction involving wolves, ravens and humans figure prominently in the storytelling of Tlingit and Inuit, Native American tribes of the Pacific Northwest and Alaska, with the ravens appearing as form-changing wise guys and tricksters, taking advantage of both humans and wolves (this information is from http://www.Adirondakwildlife.org)

A wolf will always follow a raven to food
And the raven is always glad to lead
Later then, the wolf will include
Protection for his friend in need

This relationship goes back through the centuries and is a big story.  For now, this is just a
morsel of information that may trigger your interest in watching some new research in Yellowstone about this relationship.  For more information you can go to the NPS website  https://www.us-parks.com/yellowstone-national-park/common-raven.html

or go to a neat local personality’s website who teaches about animal communication and relationships.    https://www.ayellowstonelife.com/to-catch-a-raven

The 45th parallel is a circle of latitude considered to be halfway between the equator and the North Pole.   This bisects the very northern part of Yellowstone Park and our part of Montana.  On the summer solstice, daylight at this latitude is 15 hours and 37 minutes.  On the winter solstice daylight is 8 hours and minutes. Below is a photo of a sign on the Gardner River.  A few miles downstream (to the north!) the Gardner flows into the Yellowstone river right on the northern boundary of the park.

Happy solstice wishes to everyone!

You can contact me at lesliehstoltz@gmail.com and see this and past blog posts at   https://walkinjim.com/blog      Leslie