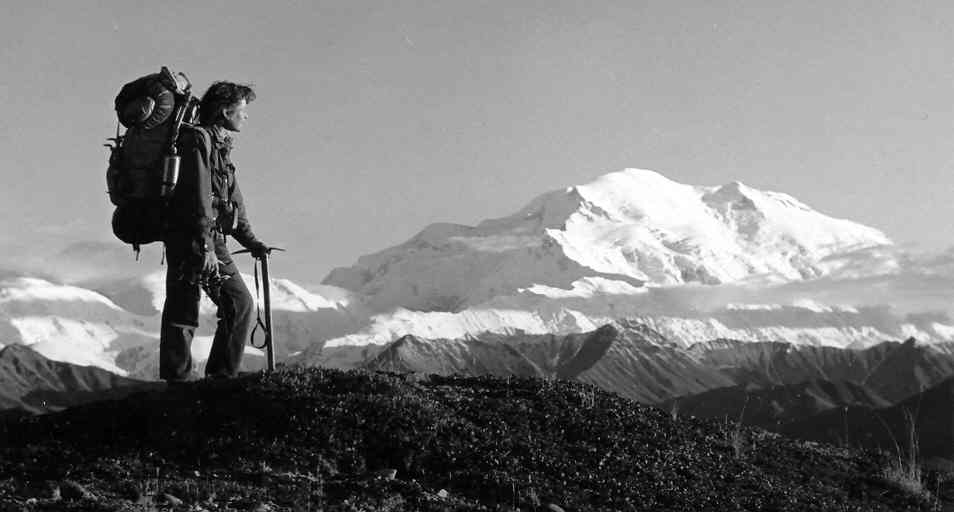 Legendary conservationist and pioneering outdoors woman Virginia “Ginny” Hill Wood died on March 8th  peacefully in her home in Fairbanks, Alaska.  I was honored to be present and by her side humming and singing songs to my dear friend until the end. At the age of 95 she had lived an incredible life and was able to stay in her own home, surrounded by love.

Ginny was a decorated member of the WWII Women Airforce Service Pilots (WASP), she flew fighter planes and bombers across the country, delivering them to bases and to be shipped overseas for the war effort. She arrived in Alaska Jan. 1 of 1947, after a month long odyssey of flying a surplus military plane from Seattle.  Her close friend Celia Hunter, flew a second plane alongside her.  When the temps dropped to -60 degrees below 0 F and there were no return flights to Seattle, Ginny and Celia stayed in Alaska.

Ginny and her husband ‘Woody’ Morton Wood were lucky to be able to work in the back country of Denali Park, as Woody was a back Country Ranger.  Ginny would often accompany him on some trips. In the summer of 1951 Woody’s job took him to Katmai National Monument where according to Ginny’s stories “…our job was to explore the country there for recreational opportunities”. In 1952 Ginny, Woody, and Celia Hunter founded Camp Denali, one of Alaska’s first  eco-tourism lodges, located 90 miles out the Denali Park Road, near Wonder Lake in then Mt. McKinley National Park.  Ginny spent every summer at Denali National Park, building camp where they hauled in everything, lead back country hiking trips, and developed a deep connection to the place.

Ginny was one of the matriarchs of Alaskan conservation, along with her long time friend Celia Hunter. Ginny dedicated her life to preserve Alaska’s environment and wild lands.   Ginny’s voice was heard from Washington D.C  to Juneau Alaska with her eloquent writing and  testimony for many Alaskan issues.  She was a strong voice heard in speaking out on the following major environmental issues; Project Chariot, (a plan to use nuclear bombs to create a harbor in Alaska’s North Slope), the proposed Rampart Dam on the Yukon River, the trans- Alaska oil pipeline, Alaska National Interest lands Conservation Act (ANILCA), and protecting from oil development the Arctic National Wildlife Range which she was involved with creating this area to be set aside as a great example of intact Arctic Alaskan Habitat, (now known as The Arctic national Wildlife Refuge).  Ginny was also one of the states first female wilderness guides, leading backpacking and rafting trips in the Brooks Range until she was in her 70’s.  She was a strong advocate for trail construction and preservation, maintaining ski trails and cross country skiing into her mid 80’s.

Walkin’ Jim and Leslie had the great honor of meeting Ginny when they came up to Alaska in 2003 to float the Sheinjak River in the Arctic National Wildlife Refuge.  They needed a foldable canoe and I mentioned it to Ginny, she was delighted her boat took a trip down the river with these wonderful people.

Ginny received many awards for her work over the years, which she received with great humbleness, and with comments like “…what’s the big deal, I was just doing what needed to be done along with lot’s of other people.”  Awards included the Alaska Conservation Foundation Award, Lifetime Achievement Award, the Sierra Clubs John Muir Award, and the U.S Fish and Wildlife Service’s Citizen Award.  In 2010, Ginny received the Congressional Gold Medal for honorable service to this country as a WASP pilot.  Senator Lisa Murkowski personally delivered the award to Ginny at her home in Fairbanks. She was inducted into Alaska Woman’s hall of Fame that same year.

Ginny in her later years had a deep love for gardening, and spent hours every summer working the soil  turning her large sunny garden with a hand trowel.  I will always remember walking down the path to her house, looking first in the garden where in the summer she was always there.  With her duck taped patched rain pants and sunhat, she would look over to me, with a smudge of dirt on her face, and throw me a smile as wide as the Tanana Valley”.  She was an amazing friend to many who worked on environmental issues with her, did backpacking or river trips with her, and many who were inspired by her philosophy, tenacity, and sense of humor.

As Ginny always said  “I was the right age, at the right time, in the right place.”

I have been but one expression

A part of the magic, the hope, the yearning, the love,

The disappointment, the anguish and the ecstasy

Through a moment of time

In this wonderous universe

On this sacred planet

About which we yet know so little,

Thanks for the odyssey, Great Spirit!

“I’m not sure whether my life has turned out the way I thought it would. But it’s been a great adventure. The human race was a great experiment and I’m awfully glad I got in on it.”

“I don’t feel that living the way I have was trying to prove something. It wasn’t a movement. It wasn’t an “ism.” It wasn’t a back to the earth type of thing. It’s just that I feel more comfortable when I look at nature. I hope I never have to open my door and step outside on cement. I want it to be dirt.”

“I don’t think I have any words of advice or wisdom or any recipe. You’re born with what you’re given. You’re born with drawbacks and assets and you accumulate some along the way. I was born, I think, at a time when it was the height of opportunity, even for women. And enough wild country so you could always get away from it all, and enough so that you didn’t have to go with a crowd if you didn’t want to. But I never wanted to start a revolution or an “ism.” Or be someone to say follow this and all will be ok. No, I think it’s a learning experience and I suppose you’ll still have it ‘til the day you die. They’ll be something that you learned and something that you mucked up, failed at.”

“I think each day is your own life to live, and what it brings and how you handle it and what you get out of it is up to you.”

For more information about this amazing woman read the book Boots, Bikes, and Bombers: Adventures of Alaska Conservationist Ginny Hill Wood edited by Karen Brewster, was recently published by the University of  Alaska Press. (This innovative and collaborative life history of Ginny Hill Wood is available at local bookstores, or on-line at Amazon.com or through: