This project is becoming even more fun as friend, colleague and business owner of Big Sky Adventure and Tours will collaborate and share some of her stories!  Together with her business partner they offer educational trips in Yellowstone.  We have worked together for years and experienced many magical events in the outdoors together.

From my window this morning I see a landscape still draped in snow.  A few dry ridgelines show through, but winter is holding on this year. Warmer days create wet and more granular snow, but very cold temps at night causes the snow to harden into a hard, icy layer called crust. Out in the morning the crust reveals the story of the previous day in a frosted crystaline glass gallery.

It’s very fun to put the story together of what happened the day before by following the tracks. Below is another photo you may want to guess what could have happened.

You probably guessed this was a bird, a Raven,that landed, perhaps to pick up a mouse.  My guess is Raven because of the distinct flight feathers and size. If it were an owl, which would have downy fuzz on the feathers for silent flight, the feathers would look less clear. If you want to see a photo of the Raven, just look at top photo and you’ll see one of these tricksters on my head!

The story of tracks in the snow can be a Shakespearian tragedy where “fair is foul, and foul is  fair”. Cross country skiing a few days ago, we came upon such a drama. 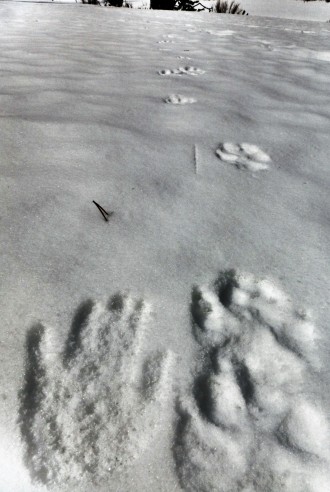 In the delicate and light snow crystals on top of a firm crust were fresh canine tracks-some large ones next to a much smaller single set. They both have 4 toes with claw marks visible. We continued up the trail, crossing the tracks many times. Sometimes the tracks were separate, sometimes all together. This was clearly two wolves following a coyote.
Wolves are loyal defenders of their territory, especially from other canines, and around their denning site. The firm crust made it easy for the much larger wolves to easily travel on top and quickly follow the coyote.

A scuffle in the snow appeared in several spots with the heavier wolves slightly breaking through, and the lighter coyote staying on top. Revealed in the snow were patterns of the coyote getting pinned, and then running away. The chase continued down the creek gully. Later we came upon the coyote’s final battle.

rchy of needs: food, shelter, water. A grizzly bear just coming out from his long winter deep sleep state, is looking for high calorie food. With feet of snow still on the ground, meals can be challenging to find. A grizzly’s nose and nasal mucosa is 100 times greater than ours, and 7 times more sensitive than a bloodhound. Notice two different tracks in this photo. One looks like “Bigfoot” but actually is the bear’s hind foot. The other track is the front foot with his front pad and 5 toes and claws showing in the snow. The bear’s front foot heel is not visible in this track. The grizzly walks with his front feet turned in slightly, and the back foot steps in the front foot track, or just in front as shown here.

This bear found dinner digging out a beaver lodge as seen below.

The snow falling today will cover the stage making for new illustrations of drama tomorrow.

This has been a very fun project and so nice to be collaborating with Denise. You have the opportunity to read how both of us are experiencing the patterns of seasonal changes. Here’s to
these wild places! Leslie