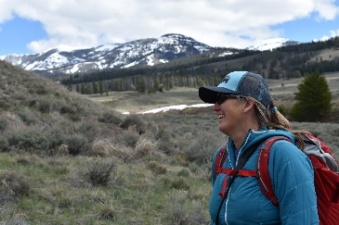 Greetings from Yellowstone where we still have a full complement of species that exist here before settlement!  The species diversity and ecological health thriving here is found few places on earth in the 21st century. The Greater Yellowstone is a huge area that land managers call the Greater Yellowstone (functioning) Ecosystem.  It is referred to as a Bioregion: one of the largest intact bioregions in the temperate zones of the world.  As I was writing this I looked at the definition of bioregion:

”Bioregion is a land and water territory whose limits are defined not by political boundaries, but by the geographical limits of human communities and ecological systems. Such an area must be large enough to maintain the integrity of the region’s biological communities, habitats, and ecosystems; to support important ecological processes, such as nutrient and waste cycling, migration, and steam flow; to meet the habitat requirements of keystone and indicator species; and to include the human communities involved in the management, use, and understanding of biological resources. It must be small enough for local residents to consider it home.”

In our part of the world some of the local residents are Bears. Both Black bear (Ursus americanus) and Grizzly Bears( Ursus arctos) live in Greater Yellowstone.  One big reason Grizzlies can exist here is they have big spaces to roam.  This is ratre on our planet now.

Bears have been slowly emerging from winter denning right now and recently, I had the good fortune to observe a Grizzly as he slowly ambled on his way to find some nourishment.  Within the last couple of weeks bear tracks have been seen in the snow.

This is the first sign of emerging from their dens.  The first to emerge will be the males.  This can be as early as mid-March, depending on weather conditions and food availability.  The last to emerge are the females with cubs, usually later in April.  Cubs are born in the den mid-January.  Mom has not eaten or had any water, nor has she urinated or defecated.  (In fact, a bears waste is reabsorbed and metabolically recycled to form proteins keeping muscle mass from deteriorating!  Another miraculous adaptation for hibernation.) These cubs will be born a pound or less, eyes closed and suckle mom the entire winter….in that little den space! When the young of the year emerge, they will be 5-7 pounds.  Spring is the season when these little “furballs” really start to move around and grow.

Mom will nurse throughout the spring and summer, but eventually teach them how to find their own food and other survival techniques.  The following winter, the surviving cubs are maybe 30-40 lbs. by that time and they typically den with mom again.

Most often they will be in their own dens by the third winter.  Grizzly bears will most often dig a new den every year. They are typically on a north facing slope to be sure enough snow accumulates insulating the den keeping it warm enough with an even temperature throughout the winter.  Often as snow is melting, and the bears have long before emerged, the dens collapse.

Black bears, which evolved to live in more densely forested areas than grizzlies, will often den in spaces under trees or logs or perhaps even in a cave like opening.

The Black bear has shorter and very curved claws which allow them to readily climb trees.  Grizzly bears have very long claws that help make them “pro-diggers”.    ( See photo above)    Other wild creatures will be emerging as well.  We start to see red squirrels and chipmunks zooming around looking for food.

Evidence of the coming spring in the Greater Yellowstone Ecosystem (GYE) can be seen with bear tracks in the snow and mud, and the arrival of migratory birds.

Three of my favorites, and some of the first arrivals to the GYE: Red Tail hawks, Sandhill Cranes, and Mountain Bluebirds.  All of these species are short to medium range migrants, spending the winter in the southwestern United States and Mexico, and out of the snow.  However, their early arrival is when the landscape is still blanketed with snow. This timing allows them to take advantage of establishing nesting sites without competition from other species. The common saying “the early bird gets the worm”, really means the best nesting site here in the GYE.

Red Tail hawks (Buteo jamaicensis) are one of the largest in the Accipitridae family, and their favorite foods are small mammals such as mice, voles, ground squirrels, rabbits, and others. They often return to the same nest as the previous year and will spend 4-7 days sprucing it up with bark strips, dried vegetation, and fresh foliage in the center of the 3’ diameter nest.  A tall, sturdy tree with a good view of sagebrush grassland habitat and their prey, dictates the perfect place to nest. Early arrival helps insure a successful nesting season.

Sandhill Cranes (Antigone canadensis) known for the elaborate dancing during mating, and often leaving their dance steps visible in the snow for us to see.  Sandhill cranes stand 47” tall with long legs, a long neck, and a large (78”) wingspan.  They nest in marshy areas on the ground and as omnivores, eat seeds, tubers, invertebrates, and small vertebrates. I often hear their loud, warbling, trumpeting call announcing their return to GYE, and the return of spring.

The flash of brilliant blue darting through the air, or perched on a fence post, signals the Mountain Bluebird’s (Sialia currucoides) arrival. They are primarily insect eaters but will also feed on berries such as currants and juniper. Mountain bluebirds nest in tree holes, or cavities, that have been hollowed out previously by woodpeckers or flickers and are referred to as secondary cavity nesters. Their early arrival allows them to establish a prime nesting cavity before other species who might want that same hole, such as tree swallows.  Bluebirds also enjoy nesting in man made boxes on fence posts throughout the GYE

Check out The Cornell Lab for more info on these birds and many others. 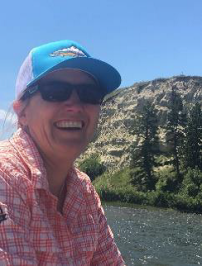 This has been a very fun project and so nice to be collaborating with Denise. You have the opportunity to read how both of us are experiencing the patterns of seasonal changes. Here’s to these wild places!.   Leslie