Greetings  everyone,
Dirt is starting to show as the snowline creeps up to higher elevation and the rivers rise and on some days, rivers appear silty with sediment. It’s a neat time of year to witness color and renewal. Some interesting signs are becoming evident showing us what kinds of activity may have occurred while the snow was on the ground. It’s been fun to unravel some of these stories on my recent walks.
Pocket Gophers
Active under the snow, gophers do not hibernate. Their deeper living spaces are where they store food. The more shallow travel tunnels are also foraging corridors. As pocket gophers burrow and excavate the soil, they create the long, worm like casts of dirt that become visible as the snow melts. Sometimes these “tube shaped” gophers are referred to as “Nature’s plowshares”. Their digging is beneficial in the soil as it helps absorb and retain moisture. Grizzly bears enjoy these tasty snacks as well! Pocket gophers are close to ground squirrel size, how very small eyes and ears and large external pockets on the side of their head to carry food to the deeper chambers. Their long claws allow them to dig up to 5 tons of dirt/year!

More bear sign It’s becoming a pattern to include some info about bears! Sign of bears seems to jump out at me. Recently, a friend texted me to let me know she had found remnants of a fox on a morning run and sent me the location. I walked up that way and found the skull and vertebral column, but I also started to find more evidence of a bigger story. Above the fox, hidden in the trees, was a down log that had clearly been excavated, likely by a bear. This is common behavior as they look for insects in the decomposing wood. Another clue was close by; evidence of the age old question if bears poop in the woods! Below the excavated log, chunks of wood and had been dislodged and had rolled down the hill next to this skeleton. We concluded it was a fox for a few reasons. It was clearly a canine by the shape of the skull and teeth. The teeth are much smaller and pointed than a coyote and the back of the skull is more rounded than a coyote. It was also smaller than an adult coyote would have been. My guess is that this fox was not killed by the bear but had died that and been unearthed by the bears rooting behavior. Perhaps the bear had even been attracted by an odor which would have been undetectable to us! My final act before I left was find a new and hidden resting place for this fox.

More excavation…….This time however, it’s not bears, but squirrels or sometimes even birds. In the photos below are 2 examples of how squirrels will stash cones later in the summer as a food source for the winter months.

The cones are cut from the trees when the seeds have developed and then cached in storage piles called middens. Typically these middens are built in small depressions that become covered with the bracts of the cones as the seeds are harvested and eaten in the winter months.

They are stored in the same place year after year and some of these middens can cover large areas, typically under a tree.

Red squirrels can harvest up to 20,000 cones a year! Of course, these squirrels are very territorial as they are protecting their midden. The midden will typically be found in the center of one squirrel’s territory. The size of a territory can be 1-3.5 acres. Below is a red squirrel. Above you’ll see cones in a depression of a midden.

Lastly, I wanted to share some of the beautiful blossoms we are starting to see pop! Below is a photo of some of the earliest bloomers, Pasque Flowers (sometimes called Prairie crocus) (Anemone patens, or Pulsatilla patens) 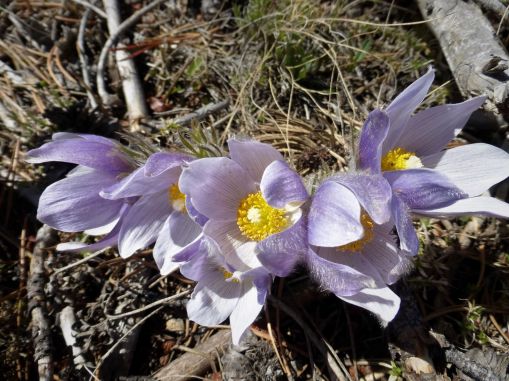 Leslie
Flowers and the Green Wave
Spring is here in the GYE! Seeing wildflowers blooming on the edges of snow patches and coming up through dried grass offers bright color dotting the hillsides and signaling that longer days of spring are here. Many flowers, such as the Pasque flower pictured above, get a jump start on their life cycle and seed production by flowering before grasses and other plants start growing tall. These early bloomers found in sage grassland habitats grow only tall enough to get the maximum sunshine. They have a stem approximately 1-3 inches tall producing what seems to be an oversized flower nodding toward the sunshine. Pasque flowers grow in clusters like a spring bouquet. Their niche of early growth allows flower, pollination, to seed production cycle to finish before other plants out compete them for space and sun. Other early blooming flowers are buttercups (Ranunculus jovis), Glaicer lilies (Erythronium grandiforum), and spring beauty (Claytonia virginica).

These wildflowers are small bursts of color seen when walking through meadows and mountain sides.

The color that really stands out when scanning the landscape is the green of growing grasses. The “greening up” of meadows starts in lower elevations and on south facing hillsides.

As the days get longer, air and soil temperatures warm, growing plants and grasses begin growing in higher elevations. We call this progression of growth, the green wave. Many animals like to eat the new grass growth and need this food source in its most nutritious stage including bears and pocket gophers.

Migrating animals such as bison and elk follow this gentle wave of greening grasses along river corridors and valleys and eventually up into higher elevations for the summer. Females with newborn calves need lush and nutritious grasses to produce nutritious milk and start building fat layers depleted after the deep winter snows. Look for newborn bison calves dotting the landscape in May and June in Yellowstone.
The green wave of grass and plant growth fuels spring wildlife migration. The season timing and patterns revolving around this growth are starting to change. More on this next time.

Sending everyone wishes for good health and time to get outside and appreciate this time of time of year that brings new life and hope. You can contact me at lesliehstoltz@gmail.com     Leslie